Ref appointed for West Ham v Wolves… and he’s sent off Masuaku before!

Chris Kavanagh will referee West Ham’s clash with Wolves this weekend, and Arthur Masuaku is unlikely to be happy about it! 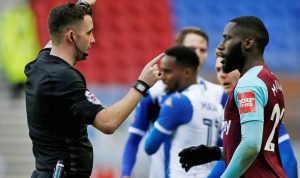 The defender was shown a red card by the ref when the Hammers lost 2-0 to Wigan Athletic in the FA Cup last season, after spitting at Latics midfielder Nick Powell.

Wigan were also awarded a penalty in the game, with Reece Burke alleged to have handled the ball in the area as Will Grigg looked to sprint past him.

Kavanagh will be assisted by Sian Massey-Ellis and Simon Long, while Steve Martin will be the fourth official.

While he enjoyed a colourful outing in the cup clash, Kavanagh was also in the middle as the Hammers beat Leicester 2-0 in the Premier League in May.

Manuel Pellegrini will hope for a repeat of the Foxes performance this time around, and so will Masuaku!

One comment on “Ref appointed for West Ham v Wolves… and he’s sent off Masuaku before!”