The referee for this Monday’s clash between the Hammers and Leicester has been named.

The Irons take on Brendan Rodgers’ side at the London Stadium on Monday as they look to build on the weekend’s thrilling 4-2 victory over Newcastle. 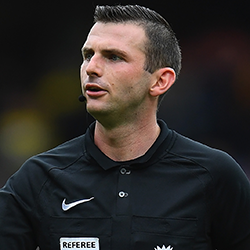 Leicester may well provide a sterner test, as they also kicked off their campaign with a win, beating Wolves 1-0 at the weekend.

And the Premier League have now announced the refereeing appointments for this weekend’s fixtures.

Michael Oliver will be the man in the middle against Leicester, with Stuart Burt and Simon Bennett his assistants and Graham Scott the fourth official. Darren England will be the Video Assistant Referee, and he will be assisted by Dan Robathan.

Oliver has refereed West Ham 30 times in his career and the Hammers don’t have a great record when he’s officiating, winning eight games, drawing seven, and losing 15.

He officiated five games for the Irons last season: the 2-1 defeats to Arsenal and Manchester City, and the wins over Leeds, Wolves, and West Brom.