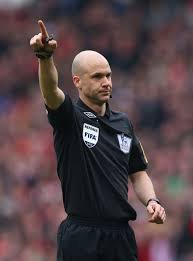 Referee Anthony Taylor’s car was allegedly attacked by an angry West Ham fan as the referee left Upton Park after the game between the Londoners and Liverpool.

The official came under heavy criticism from Sky pundits and Hammers boss Sam Allardyce during and after a game in which he awarded the new Premier League leaders a heavily disputed penalty and allowed a dubious West Ham equaliser.

And afterwards, as he attempted to drive his car from the ground, there were reports that  fans charged his car, swearing and shouting.

An eye witness told ClaretandHugh: “One bloke led the charge and punched the windscreen  trying to break it. There was a lot of serious language being used.

“It will be a miracle if  all of that doesn’t go into Mr Taylor’s reports on events during the afternoon.”

Taylor’s decisions made him the game’s narrative although there was no doubting the first penalty when Hammers central defender James Tomkins handled a Luis Suarez ball inside the box.

But the leveller from Guy Demel was only allowed after Taylor over-ruled his assistant who had flagged for an Andy Carroll foul on Liverpool keeper Simon Mingolet.

However, the goal that killed off West Ham looked a poor decision when Liverpool’s Joe Flanagan and Adrian contested a 50-50 ball with neither looking to have produced any sort of offence.

After the game Hammers boss Sam Allardyce said something had to be done as he found himself coming out to press conferences every week discussing officials’ decisions rather than the game.

He said: “We need to get this sorted out at the highest level.”

← Sam: ‘We have to sort this out at highest level’
AC: “We were unlucky!” →
Click Here for Comments >

One comment on “Ref Taylor’s car “attacked” after game”