REF WEBB AXES HIMSELF FROM ‘COMEDIANS’ 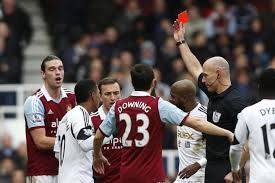 Howard Webb has binned himself from a website offering celebrity after dinner speaking gigs.

Andy Carroll’s three match red card tormentor has been at the centre of another huge row after another performance at the weekend which drew widespread scorn during and after the Arsenal/Liverpool FA Cup clash.

But that didn’t compare to the flak he received for sending off AC for messing up Chico Flores’ hair during the match against Swansea.

The Sun reports the “World Cup whistler was listed on a site calling itself the “one stop shop for comedy.”

Some might believe that a site with the word’ Comedians’ in its title might be entirely suitable for Webb who reportedly charges between £2,000 and £4,000 as an after-dinner speaker.f any reference to his public speaking activities.

Former top referee Mark Halsey has been reported as saying: “Everyone knows Howard is not refereeing the way that made him our No 1. We want to see him focused and getting back to how he used to be.

“He’s been outstanding in the Champions League this season but, for some reason, in the Premier League he has made key errors. Is it because he has other interests outside football?

“If you do too much, it can take its toll both mentally and physically. Something has to give.”

Webb’s bosses, the Professional Game Match Officials Board, refute any suggestion he does too much off the pitch.

They vet his appearances and claim to be comfortable Webb’s volume of work outside football has not significantly increased in recent years.

And Webb was relegated to fourth official for United’s midweek game against Cardiff a few weeks later.

He then found himself embroiled in one of the biggest controversies of his career when red carding AC!