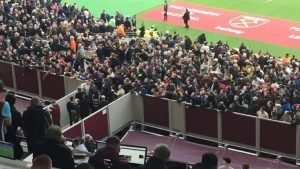 Other disabled season ticket holders located in front of the director’s box have been told yesterday that there no requirement for them to move.

The West Ham insider told C&H that there would be several barriers around the stadium to prevent the uncontrolled movement of supporters seen at the Burnley game and that the barriers were a condition of the SAG to give the go-ahead for Saturday’s game against Southampton.