Remarkable Jonjo Heuerman saves the bricks – what a fella

There are no words we can add to this story on the BBC website at https://www.bbc.co.uk/news/stories-49884207?fbclid=IwAR2ufgi8HDW6LDGtDhHdNC3yndrzk1nZfgKWYYNke5SIHGeGnbkkpE-kFSo

All we can do is to doff our caps to a remarkable young man and wonder whether there has ever been a Hammers supporter quite  like Jonjo Heuerman! 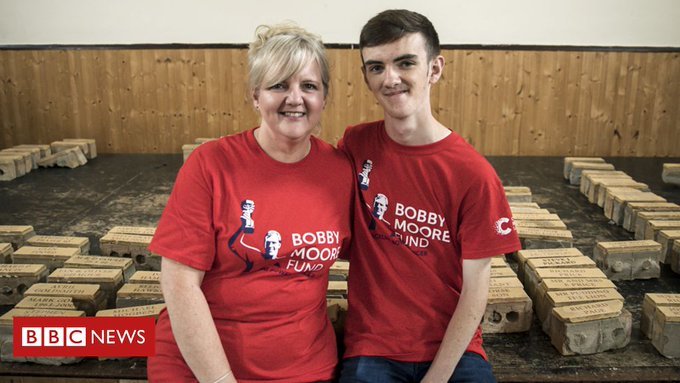 As Donna Heuerman looks out of her window every morning, she sees row upon row of bricks lined up in her garden.

They’ve been left there by her son Jonjo – but while most mothers would be frustrated, Donna couldn’t be prouder. The bricks are evidence of her son’s determination to help other people.

“He gets involved in all sorts of weird and wonderful things,” Donna says. “He’s been fundraising since he was eight years old, when his nan died of bowel cancer.”

The loss of his grandmother prompted Jonjo to raise £350,000 for the Bobby Moore Fund, a cancer charity linked to

So when West Ham announced that their old stadium, the Boleyn Ground at Upton Park, was about to be demolished, Jonjo was already a veteran charity fundraiser.

For him, the demolition was an opportunity.

“He asked for a couple of seats or something that could be auctioned for the charity,” Donna says.

The demolition company answered his request and provided some seats. But they also pointed out they were due to knock down a commemorative wall made up of bricks paid for by fans, and they didn’t want them to end up in a skip.

“The builders supported Arsenal but ultimately they were football fans and they couldn’t take a wrecking ball to the wall,” Donna says.

“They said, ‘If we can knock down these walls one by one, brick by brick, would you take them?’ And Jonjo said, ‘I think we should do something mum.'”

Donna and Jonjo were expecting a few hundred bricks, but in the end the builders managed to save 1,000 of the 1,400 in the wall.

At first they stored them in the West Ham supporters’ club but when that was shut down in 2017, a new home was needed. The only option was to move them to the family’s back garden.

“They were safe, that’s all that mattered,” Donna says.

Each of the bricks is unique. Some are marked only with initials, some have names and messages like “Super Dad” and “Life Hammer” (as West Ham supporters are known as Hammers).

So he set up the Boleyn Brick Salvage Facebook page and a website, in the hope of reuniting them with their owners.

Jonjo and Donna weren’t sure they would hear back from anyone but soon a trickle of messages began to arrive.

One of them was from 65-year-old Cathy Finlayson.

Cathy asked if they had a brick with her grandson’s name on it – Jake Russell.

She explained that six-year-old Jake had played for the West Ham Juniors team and loved watching the senior team play.

“He had that special little character and everyone who met him said how lovely he was,” his grandmother says.

“He had a cheeky little way that made him sparkle. He had a special way with him that you couldn’t help but love.”

But one day 19 years ago, as he was on his way with his mum to show a friend some autographs he’d collected from West Ham players, he was tragically killed in a hit-and-run incident.

The family then dedicated a brick to Jake’s memory.

Jonjo quickly found it, having laid out all the bricks in alphabetical order, and he and Donna presented it to Cathy.

“When I got the brick in my hands, I was bouncing about and it was like they had given a bit of him back to me,” says Cathy.

“It’s a part of West Ham and part of Jake and it brings back so many wonderful memories.”

Jonjo doesn’t deliver every brick by hand – instead he organises a brick-collection day every few months.

There is a set routine. He and Donna get up early, at their home in Kent, and pick out the bricks that are due to be collected. Then they load them into a van and drive them to a pre-arranged pick-up point. Usually about 50 people come to collect them.

“It’s always a good mood but sometimes it does get a bit sad when people come and get them and explain some of the stories,” Jonjo says.