Rennes boss Bruno Genesio has confirmed that he expects Nayef Aguerd to leave the club this summer, as the Hammers continue negotiations to sign the defender.

The Hammers remain in talks with the French club over a deal to secure the defender’s signature, as boss David Moyes looks to reconfigure his defence. 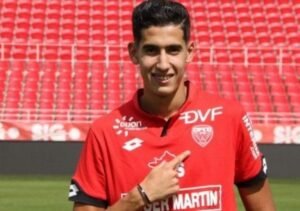 Aguerd looks set to be the first signing

Aguerd has been identified as a priority target and a bid of around £25.5m has been tabled for the Morocco international, who is capable of playing as both a centre-back and a left-back.

The Hammers have been confident of completing the deal but have remained locked in talks with the Ligue 1 club for some time.

Genesio has now confirmed that he expects Aguerd to leave the club this summer, pointing towards an agreement soon being found between the two clubs.

He has also made it clear that the defender has told Rennes that he wants to leave, with a deal only getting likelier as the days progress.

As per KUMB, Genesio said: “It is true that there are advanced discussions concerning Nayef. He has expressed a desire to live another adventure.

“In times like this it is always difficult to retain a player – so there is a good chance that Nayef will no longer be at Rennes next year.”