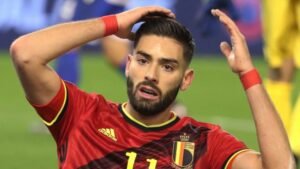 The Belgian is earning £180,000 a week in China with Dalian Yifang and Premier League are unlikely to be willing to match that wage package.

Carrasco is reported to be currently in Belgium, training on his own as talks are ongoing in a bid to sort out his immediate club future.  The 26-year-old went on to make 25 appearances in the Chinese Super League last season and scored 17 goals, adding a further eight assists. His contract at the Chinese club is set to expire at the end of 2022 and so Dalian Yifang may push for a sale, rather than a loan this month, if he is to depart.

Carrasco began his senior career with Monaco, before moving to Atletico Madrid for a fee in the region of £20m in 2015.

In February 2018 Carrasco joined Dalian Yifang, and has scored 24 goals in 52 appearances in China.