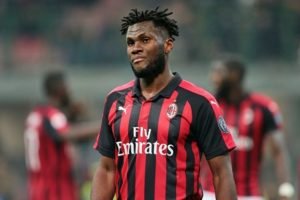 The Hammers along with Wolves are again being reported as having made AC Milan midfielder Franck Kessié a summer target.

Calciomercato  claims the chances of the 23-year-old moving to England in the next transfer window still ‘remains alive’.

Kessié’s current deal with the Serie A side is until 2022 athe Italian website specifies the confirmation of the midfielder to be with the Rossoneri next season is ‘still to be defined’.

Should Milan decide to sanction Kessié’s sale in the summer, Wolves and West Ham could battle it out for his signature.

ClaretandHugh says: Don’t believe it. Kessie was on the agenda last summer and it never happened, and at a massive asking price in a flat market, it’s just not going to happen. Obviously, there’s little for many to write about as the health scare problems at this moment and it will become par for the course that old stories will be dug up with only the merest attempt to spin them from where they were months ago. The player carried a price tag when Arsenal were supposedly interested back in January when the price was being quoted at €25 million. With nobody at all certain how much value will be lost on asking prices on players from those paid this will be a difficult year. We are not even sure when the window will open so it really is best to take such reports as light entertainment rather than them being anywhere near reality.