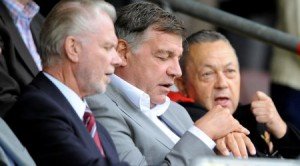 Sam Allardyce is today being reported as “as heading for a showdown” with the two Davids after banning their choice of chief scout from the training ground.

David Gold and David Sullivan turned to ex-Everton talent spotter Tony Henry after a summer move to get more control over signings.

But Allardyce already had his own trusted chief scout Martin Glover in place and according to national newspaper reports this is now becoming a major issue.

The Daily Star says the manager is understood to have now told Henry that he is not welcome at the Hammers’ HQ.

And after the stormy summer in which the owners laid the law down on new signings, that is unlikely to go down well the owners…if true.

Henry was placed on gardening leave by Sunderland – his last employer – after resigning his position and is due to join the Hammers in November.

But the position is now reportedly tense and much behind the scenes manouvering could well take place over the next couple of months.

One comment on “Report: Allardyce and owners head for “showdown””