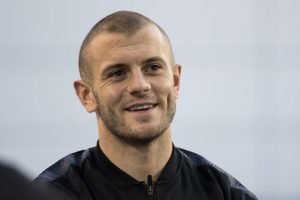 A new report has emerged this morning declaring that Jack Wilshere will resist any attempt to move him off the West Ham squad this month.

The report comes from The Athletic who claim that  their understanding is there has been a breakdown in relations with members of the West Ham medical and fitness set-up and that he had earlier hired a private physiotherapist to work with him outside the club.

However, they add that whilst he has only played eight times this season, there is confidence around the London Stadium that he will play a more prominent role in the months ahead.

The report adds: ‘The latest problem in a career plagued by physical issues relates to his pelvic area, but it is not thought to be a major concern and he should return to full training in the next fortnight.”

Wilshere has yet to join the main group for a session with Moyes and, when he does, it will be a vital opportunity to impress both West Ham and potential suitors, with 18 months left on a three-year contract. It is understood he would resist any attempts to be sold this month.

ClaretandHugh says: It’s becoming a tad embarrassing reporting on the latest scenarios  surrounding Jack Wilshere – can there ever have been such an error of judgement as when we signed the midfielder to a  three year deal. This latest report apparently details his latest problem areas with injury but makes no mention of other absences caused by sickness bugs and viruses. Despite all this the player is apparently claiming that he will resist all attempts to sell him this winter. Well, given the circumstances, lack of match fitness and all else that shouldn’t be too difficult. Even were he fit to play there have to be serious doubts of his ability to maintain the pace required and it is truly becoming difficult to see where this particular career goes from here. The club insist they will honour his contract and avoid negotiations aimed at an early pay off. Seems no real answer under a manager who demands 100per cent plus commitment.

24 comments on “Report: Alleged breakdown between player and medics”