Arsenal are lining up a move for Brentford star Said Benrahma, according to 90min.

The attacking midfielder was in exceptional form for the Championship club last season as they came within 90 minutes of promotion to the Premier League. 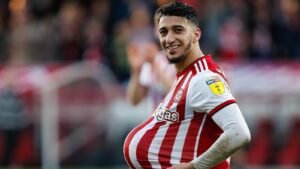 They reached the play-off final but they fell to a 2-1 defeat to London rivals Fulham.

90min reports that West Ham were interested in a move for the Algeria international, who scored 17 goals and registered 10 assists in the second-tier.

But it is the Gunners who are now lining up a swoop as they look to strengthen Mikel Arteta’s squad this summer.

Brentford value the winger at £25m in this transfer window and the north London club are said to be willing to meet that valuation as they look to bring Benrahma in.

The Irons, of course, are more focused on strengthening their defence, with centre-backs, and full-backs at the top of the agenda ahead of potential forward acquisitions.