Posted by Sean Whetstone on August 5, 2018 in News, Whispers 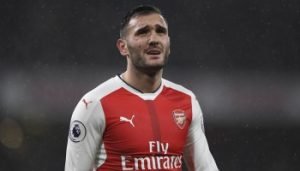 eports in Italy suggest West Ham could be about to Arsenal striker Lucas Perez for around £8m.

Nicolo Schira from Gazzetta Dello Sport both sides could conclude a deal on Monday.

Nicolo posted on Twitter “Lucas #Perez is getting closer to #WestHam from #Arsenal. On monday they will talk to finalize the deal.”

It was reported on Saturday inn Portugal that the forward had agreed a deal to join Sporting Lisbon before the transfer window closed.His agent Rodrigo Fernandez Lovelle was approached by Calciomercato.com and asked about the claims from A Bola that a €6m (£5.4m) bid had been accepted for the 29-year-old. “I have never spoken with anyone about Sporting”

West Ham are thought to have six active bids in play with a plan to land one or two players before the window shuts on Thursday.