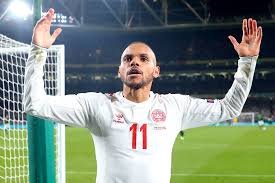 West Ham are being linked with a £15m striker before the transfer window opens at a time when there is no cash to buy him anyway.

The Sun reports the Irons could move in on Dane, Martin Braithwaite despite nobody having a clue when one season will end and a new one start.

It left insiders at the London Stadium incredulous with one telling us by e mail: “This is crazy – there’s no football so I suppose someone has to do something to maintain interest.

“At this stage we are doing nothing more than hoping and praying we can get this season ended and the new one started as close to the date it should be opening as possible.”

Barca used a Spanish rule which lets clubs make a signing outside the window if a player is ruled out by injury for five months.

The Catalans lost Luis Suarez and Ousmane Dembele to long-term issues. But the deal infuriated Leganes, who lost their top scorer without being able to replace him.

However Dembele and Suarez may be fit when LaLiga resumes, so Braithwaite is already surplus to requirements and according to the report that has alerted the Hammers to the former Middlesbrough man.
Permalink