Championship club Cardiff City are considering a swoop to sign Aji Alese from West Ham this summer, according to a new report.

Wales Online has claimed that there is interest from the Welsh side in bringing the defender into the club as they look to strengthen in the next transfer window. 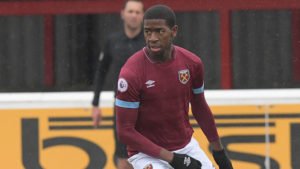 It’s made clear in the article that Cardiff would look to take Alese on loan, rather than attempting to sign him permanently.

An England U20 international, the 21-year-old has played twice for the Hammers’ first-team, including an outing in the Europa League earlier this season, when he played 90 minutes against Dinamo Zagreb.

He has been a stalwart for the U23s, too, playing 55 times in total.

Alese has gone on loan previously, playing for both Accrington Stanley and Cambridge United on previous short-term spells, so the Irons may well be receptive to a loan approach from a club playing at Championship level.