Report: Chicharito to be thrown out of West Ham 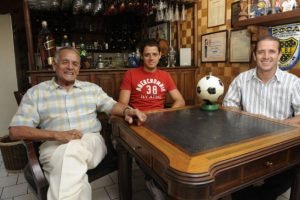 Chicharito’s grandfather, Tomas Baltazar, has all but announced the Mexican striker won’t be at West Ham next season.

Over there, they’re going to throw him out of the West Ham team. It’s a team that isn’t well composed, and that means there’s no one to give him a ball to put in the back of the net”.

Hernandez has already admitted he asked to leave the Hammers in the January transfer window but his request was denied and has more recently been linked to a move to MLS side DC Washington this summer.
He has scored 8 goals from 26 appearances since joining the Hammers for £16m last July from Bayer Leverkusen penning a three-year contract. If the report is to be believed his time in London will be coming to an end very soon.
Permalink

3 comments on “Report: Chicharito to be thrown out of West Ham”