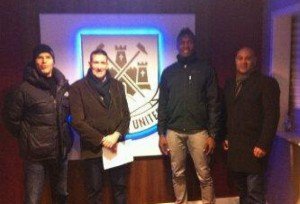 Nigeria international Azubuike Egwuekwe is reported to have flown to London for talks with the Irons according to SL10.ng

The Warri Wolves skipper had earlier been linked with a move to Watford in the January transfer window but it now appears The Hammers may be on his radar.

A source close to Warri Wolves is quoted as telling  SL10.ng: ”Azubuike Egwuekwe is in London right now. He is with West Ham.

Hapoel Tel Aviv are also interested in him, and representatives of the club have been making enquiries.’I am aware they called Ibezito Ogbonna to ask him about information about Azubuike Egwuekwe.”

Egwuekwe, 25, is a regular for Nigeria with 34 caps, and is a centre back, standing at 6ft 5in. Previous reports suggest West Ham will have to pay £4m to land Egwuekwe  which some way off the reported £500,000 bid West Ham initially submitted.

One comment on “Report: Egwuekwe flies in for Hammers talks”