Fulham are lining up a potential swoop to sign Joe Worrall from Nottingham Forest this summer, with the Hammers also weighing up a bid, per The Sun.

Irons boss David Moyes is keen to do a deal for the Forest skipper, who is currently preparing for the play-off final, when Forest are set to take on Huddersfield Town. 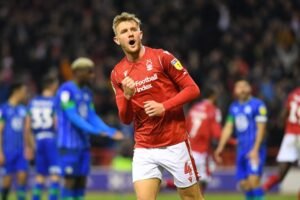 Worrall is set to stay at the club if Forest win promotion, but a defeat at Wembley would open he door to a transfer.

Fulham and the Hammers have both scouted Worrall extensively and there is also interest from Leicester in signing him.

Boss Moyes will be backed with new additions in the summer, but it remains to be seen if Forest’s promotion will scupper plans for a deal for the 25-year-old.

Worrall has been with Forest since 2015 and has made 182 appearances for the club. It may well be that his final appearance comes at Wembley.