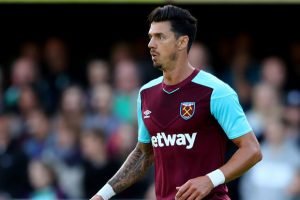 A new report has suggested that West Ham defender Jose Fonte has agreed to a €5.5m move to Chinese Super League side Dalian Yifang. The veteran Portugal international will travel to Asia next week to seal the deal after being frozen out claims the Daily Record.

The report says the Portugal international will sign a three-year contract for newly promoted Dalian, and is due to travel to Asia on Monday to complete his exit from West Ham.

Fonte, who turned 34 last month, has been listed three times as an unused substitute during that period and was reportedly made available for sale in the January window.

Slaven Bilic signed the central defender for £8m. Led by Spanish coach Juan Ramon Lopez Caro, Dalian are reinforcing their squad with European players ahead of their CSL campaign, which begins next week. It is understood that Fonte’s new contract is worth €4m a year, after tax.

4 comments on “Report: Hammer agrees deal to move to China”