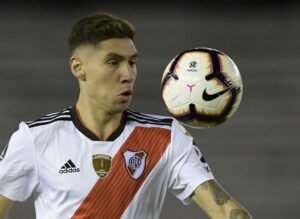 Spanish website Estadio Deportivo claims that River Plate right back Gonzalo Montiel has verbally agreed a pre-contract with West Ham after first attempting to bring him to east London in January, only to be prevented by financial fair play regulations.

The deal at the end of the season is reportedly worth in the region of £10m but could be called off if Montiel is unable to secure the necessary work permit, with his future ‘in the hands of the Home Office’.

Last week we reported how Manuel Lanzini wants to see River Plate full-back Gonzalo Montiel playing alongside him at the London Stadium next season. He admits to talking to the 23-year-old about joining the Hammers this summer after a bid was reportedly rejected in the January transfer window.

Although Montiel is primarily a right-back he is also capable of filling in at centre back too if so required. He is often deployed as a ring winger for River plate who often play him in an attacking formation but he is said to posses excellent defensive skills as well as the ability to push forward.

In March 2019, Montiel was named in Argentina’s squad for friendlies against Venezuela and Morocco by manager and former Hammer Lionel Scaloni. On 22 March, Montiel made his debut against Venezuela. He has made 64 appearances since 2016 for Lanzini’s former team River Plate.

4 comments on “Report: Hammers agree pre-contract with right back”