West Ham are reported as being the latest club fighting for the signature of Nicolo Zaniolo from Roma. Rumours have been circulating for the last few days that David Moyes is interested in the Italian trickster.

Respected Italian journalist Ciro Venerato, was speaking about the Roma players situation during a transfer round-up on Italian radio. 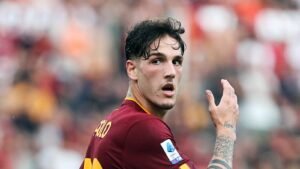 Venerato was talking in general about all sides who are interested the 23-year-old, when he revealed the information that the Hammers made an attempt to sign him today.

“An offer from West Ham was also made this morning, a loan with an obligation to buy linked to avoiding relegation set at €25m.”

Venerato went on to explain that the offer from West Ham was being ‘put on hold’ for the time being whilst they await more interest, in the hope of prompting a bidding war.

There are suggestions that Newcastle have offered a €40m package for the player, with the likes of Spurs, Nottingham Forest and Leicester City all mentioned as well.

As mention in the exclusive by Hugh below, there is some reluctance by the club to over commit to panicked acquisitions given the impending return of Maxwel Cornet.
Permalink