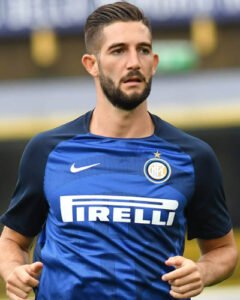 Italian Journolist Nicolò Schira claims West Ham have enquired about taking Roberto Gagliardini on loan but says Inter Milan would not want to sell him. The 25 -year-old Italian national midfielder began his career at hometown club Atalanta playing for their youth teams and later for the reserves. He was promoted to the first-team squad for the 2013–14 season. After three loans to Cesena, Spezia and Vicenza  Gagliardini joined Inter Milan on loan, with an obligation to buy for £18.5m in the summer of 2018.

Gagliardini is described as a quick, hard-working, energetic, physically strong, and well-rounded midfielder, who is capable of playing as a box-to-box, central, attacking, or defensive midfielder. He is effective as a ball-winner, but can also distribute the ball well and start attacking plays or provide assists after winning back possession, courtesy of his good vision and technique. He also possesses a good shot, which allows him to contribute to his team’s offensive play.