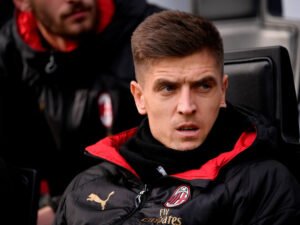 According to a port by Italian outlet Calcio Mercato, West Ham is in the driving seat to sign the Poland international striker Krzysztof Piatek. with the Serie A outfit preferring to cash in on the player, rather than send him out on loan. The South Sheilds Gaqzatte claims the Hammers have edged in front of Newcastle United in the race to sign the AC Milan frontman adding that Newcastle enquired about the player earlier this window but wanted a loan with option to buy. Aston Villa and Barcelona have also been linked with Piatek.

The hope from AC Milan is that an auction would be held for Piatek – to help push his transfer fee over the €38m or so they paid for the striker a year ago to bring him in from Genoa in January last year having scored 19 goals in 21 appearances for the Grifone after a move from Cracovia in his homeland Poland.

Piatek has endured a tough season with Milan after a free-scoring one last season. Milan themselves haven’t had a great time in Serie A, and Piatek’s struggles were bolstered when the club moved to bring in Zlatan Ibrahimovic as their main striker.

19 comments on “Report: Hammers in driving seat for Polish striker”