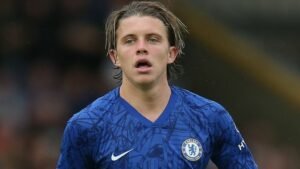 Gallagher spent last season on loan at Swansea City from Chelsea and established himself as one of the best attacking-midfielders in the Championship as the Swans made the play-offs, but their failure to win promotion means he will not be returning to the Liberty Stadium.

The England Under-21 international is keen to step up and test himself in the Premier League, but there is currently little prospect of him being breaking into the Chelsea first team.

The report suggests at least eight different clubs are known to have made an approach for the 20-year-old attacking midfielder including  Newcastle, Crystal Palace, Fulham, Southampton, Leeds United and West Ham.  Geographical factors could make a big difference, with Gallagher having been born and raised in Epsom in Surrey

He joined Chelsea at the age of six and made 31 appearances in his first season as a scholar, including two as a substitute in the Youth Cup, and made his development squad debut in March 2017.  In 2018, Gallagher signed a new contract at Chelsea that runs until the summer of 2021. After being handed the Academy Player of the Year award after the 2018/19 season, the midfielder joined Charlton Athletic on loan. In January 2020 he returned from Charlton having missed just one Championship game and scored six goals from midfield. He switched loans to another Championship club, Swansea, who were challenging for the play-offs The midfielder ended the season with a total of 21 games for the Welsh side.

He scored six goals and made 11 assists during the 2019/20 season between his two loan periods.