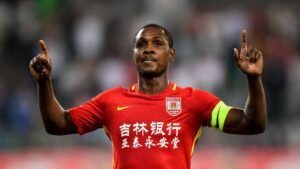 According to TeamTalk West Ham are one of six Premier League clubs looking at Odion Ighalo.

The Nigeria international is currently in China with Shanghai Shenhua who he joined in February this year– but the reports suggests he is now keen to move back to the Premier League this winter.

Shenhua would sanction a loan with a view to a permanent deal, making his prospective signing extremely appealing to a number of sides in January.

Watford, Everton, Crystal Palace, Newcastle and Southampton in addition to the Hammers have said to have all indicated an interest in taking Ighalo in the New Year and it will likely come down to the striker’s preference with all six clubs reportedly keen to bring him in.

However with the news that Mario Husillos could be on his way before next summer we need to take all transfer rumours with element of salt.

3 comments on “Report: Hammers in pursuit of former Watford striker”