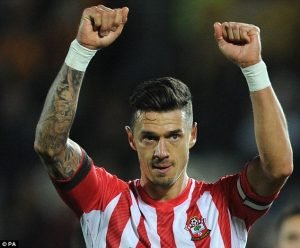 WEST HAM are reported to have bid £4 million for Southampton centre-back Jose Fonte.

Manager Slaven Bilic wants the 33 year to help solve some of the big problems thrown up at the back this season and is apparently ahead of  Crystal Palace and Everton in the race.

Fonte who joined the club in 2010 and has made approaching 300 appearances has made it clear he wants to leave St Mary’s this month.

And Bilic is now firmly in the race for one of January’s hottest properties as he looks to arrest the club’s slide. The Hammers have lost their last three games and have already conceded 35 league goals.

The Sun says Hammers officials have been in touch with Southampton and lodged a bid of around £4million to see if Saints are willing to sell.

30 comments on “Report: Hammers in race for Saints defender”