Report: Hammers in race for striker 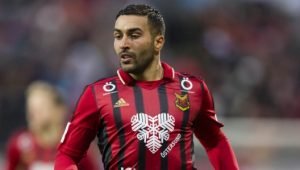 But they are not alone with several clubs now watching regularly following the striker’s fine performance against Arsenal in the Europa League.

After the first leg at the Jamtkraft Arena, Gunners boss said: “Technically and  tactically I was impressed by him.

According to ESPN Southampton, Leicester City, West Brom and Brighton have also been on the case.

But the Irons will continue to monitor the the 24-year-old as David Moyes looks to strengthen the team in the summer.

His agent, Ferhat Cifici, revealed there is interest in the player after the game at the Emirates but was reluctant to release further details regarding the strikers future.