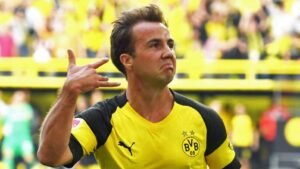 World Cup winner Mario Gotze has been advised to seek a summer move to Premier League with  West Ham one possible destination.

His compatriot Michael Rummenigge believes a move to England could kick start his stalled career.

Rummenigge told Sportbuzzer: “I’m thinking [he could join] clubs like Everton or West Ham or some Italian middle-of-the-table club.

“In the Bundesliga, he could fit with Borussia Monchengladbach or Leverkusen. I hope that he shakes off the pressure and finds his way although, right now, I have my doubts.”

The German star’s contract at Signal Iduna Park expires in six months and the club are willing to offer the possibility of an extension.

Any new club are likely to have to match his current wages, thought to be around £160,000 per week.

Gotze left Dortmund to join Bayern Munich in 2013 and was Germany’s hero when he scored the winner in the 2014 World Cup final against Argentina.

Despite winning three Bundesligas, his time at Bayern Munich did not quite go to plan personally and he rejoined Borussia Dortmund in 2016 before being diagnosed with myopathy, a muscular disorder. This season, though, he has struggled to cement his place in Lucien Favre’s side.