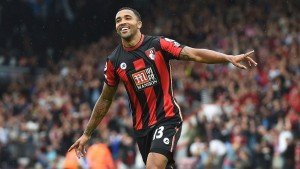 Speculation that the Hammers want Bournemouth’s Callum Wilson this summer was inevitable but as unlikely as it gets.

The Daily Express is the latest ‘paper to run what is obviously a flier along with the well known  Eberechi Eze  situation and adding another whilst adding Wolves Morgan Gibbs-White.

Eze is undoubtedly David Moyes’ number one pick if he can get him but the suggestion that Wilson will be on his way looks pretty well dead in the water.

Quite apart from anything else the Hammers – as we reported exclusively last week – will certainly give Seb Haller another season to see if he can find the form they paid £44 million for whilst he was at Eintracht Frankfurt.

They have no chance of getting anything like that back were they to put him up for sale and are looking for  a cut price and better replacement for Albian Ajeti who has no Hammers future under David Moyes.

Gibbs-White would only be considered at a low fee as an addition to the squad as the Hammers are particularly strong in midfield and were Eze to be added to the mix his chances would  to be severely limited.