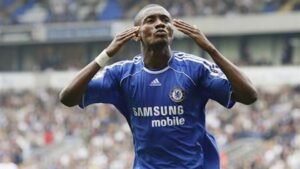 Kalou is best known in the UK for his six-year stint at Chelsea, during which he won the Premier League, the Champions League, the FA Cup four times, the League Cup and the Community Shield.

The report repeated by the Daily Express who says Moyes apparently sees the Ivory Coast international as the man to challenge  £45m record signing Sebastian Haller who is failing to justify his price tag this season.

Kalou now plays for German club Hertha BSC where he moved in 2014 for the cut down price of just £1.62m.

Kalou hardly fits the model of young exciting players under the age of twenty five with resale value David Moyes has spoken about but there are exceptions to that strategy like 32 -year-old Darren Randolph bought in to replace Roberto and for cover for Fabianski.

Asked about the chances of signing a new striker before Friday the manager replied post-match last night: “We’re looking really hard but there isn’t that many out there.”