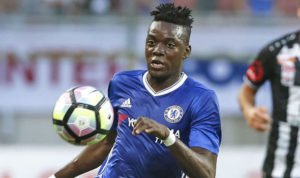 The 23-year-old former Chelsea youngster has been in great form for Lyon scoring 29 goals and creating 12 assists for the Ligue 1 side in all competitions in his two seasons with Lyon. The report adds that Lyon appears unlikely to sanction a loan move and that sources close to Lyon believe that both Spurs and Arsenal are considering a move for Traore.

Traoré endured a mixed 2018-19 season in which he scored 11 goals and assisting three in 45 appearances.

But Lyon president Jean-Michel Aulas is thought to want at least  €40m (£35.8m) for his striker.

Not only are Lyon unlikely to sanction a loan but it is also doubtful whether would be keen to play second fiddle to Seb Haller possibly on the bench for a lot of the time.

The youngster is said to want regular first-team football and that could be a hard promise to make at West Ham this coming season.