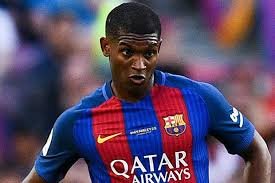 West Ham continue to be linked with Barcelona’s Marlon Santos.

The 22 year old central defender is also fancied by Leicester City but reports claim the Hammers are favourites following the arrival of new manager Manuel Pellegrini.

The 22 year old made three appearances for Barca before moving on loan to Nice and according to Mundo Deportivo is strongly fancied by Pellegrini.

Mundo claim on their website the the Hammers have been in contact with the Catalan side after the defender’s impressive loan spell with Nice. where he made 27 appearances.

And according to Marca – the Spanish tabloid – Santos is entirely out of contact with the Catalan giants who quote him as saying:  “I don’t know if anyone from Barcelona has come to see me this season, I don’t keep in touch with the club.

“I’ve grown a lot, I’ve completely changed my football mentality and that’s the most important thing.”