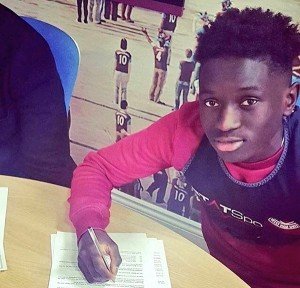 The 18 year old Portuguese midfielder has still not signed a new deal with the Irons after several months of negotiations and is clearly considering his options following interest from AC, Manchester United and Liverpool.

He heads into the final year of his contract this summer with David Moyes looking to beef up his midfield options next season,and like thisone , that is set to limit Quina’s first team chances.

And should he remain uncommitted into the summer the Hammers may decide to cash in on the teenager who would command a fee of around £8 million according to sources close to the situation.

Quina appeared for the Irons at 16 in the Europa League last season and was used during the Carabao and FA Cups.

However, the youngster is still awaiting his first Premier League appearance.