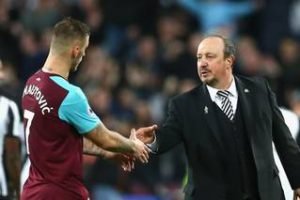 West Ham are tonight as reported as being ready to make a formal approach for Rafael Benítez.

According to The Guardian we are now giving serious consideration to triggering the £6m release clause in the Spaniard’s Newcastle contract.

The report follows David Sullivan’s official website statement claiming the club would have a PL and European experienced manager within a week and that the ‘process’ was going well.

The Hammers – as reported here several days ago – would need to dig up £26 million should Benitez and Newcastle agree to the move which would cover the release clause plus £10 million a year wages over a two year deal.

West Ham have coveted Benitez for the last three years and with the manager becoming increasingly unhappy with his Newcastle situation they are ready to cash in if they get half a chance.

They will need to convince him, however,  that he will receive funds to strengthen an unbalanced squad.

Benítez also needs to ponder whether he is ready to swap his near zero relationship with Mike Ashley for the regularly documented situation at the London Stadium.

The Guardian claims “Ashley is desperate for Benítez to remain and extend his contract, not least because having the former Champions League-winning manager in place could help him in his ambition to sell Newcastle for as much as £400m.”

Benítez and Ashley have not met for talks, with negotiations being conducted by phone and email between Benítez’s representatives and Lee Charnley, Newcastle’s managing director.