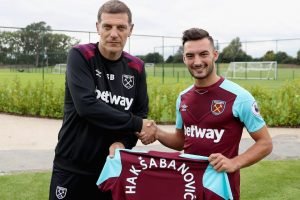 The 21-year-old was part of a deal with an agent that smoothed the way to land Marko Arnautovic to become a Hammer in 2017. The Montenegro player is reported to be one of the highest-paid Academy players rumoured to be earning £15,000 per week.  Football agent Will Salthouse is said to have been involved in the double deal that bought both Arnautiovic and Hasanović to West Ham.

One comment on “Report: Hammers reject £5m bid for on loan player”