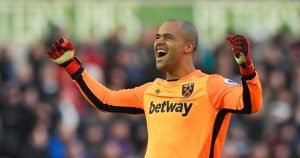 With the two clubs having agreed a £4 million move for the stopper, the move remains on hold for now whilst the former Hammers keeper recover full fitness.

But he Boro boss remains confident the deal will finally be pushed through sometime soon when he addressed the media after his team were beaten in the third round FA Cup replay at Spurs last night.

The Hammers have been linked with various other keepers including Cardiff’s Neil Etheridge over recent days and that still remains on the back burner.

But Woodgate – quoted in the Hartlepool Mail – claims Randolph could soon be back at the London Stadium for his second spell at the club.

Giving an update he said: “Darren? Maybe the next 24 hours we’ll find out more. I don’t think it’s too far away to be honest, so let’s see.”

Randolph has a similar injury to the one suffered by Lukasz Fabianski who is expected to be out for the next couple of games.