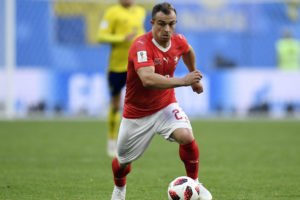 The Hammers are being widely reported as being keen to bring in Liverpool’s Xherdan Shaqiri in the summer transfer window.

Shaqiri could prove a highly interesting addition if the Hammers are ready to go to the likely £22.5 m price tag to reunite him with former Stoke team mate Marko Arnautovic in what could be a really exciting link.

He could  be a crucial reinforcements if the Hammers are going to put pressure on the top seven next term as with him and Yarmolenko putting pressure on each other we would be looking in fair shape.

Grady Diangana did ok down that side but the arrival of Shaqiri would put us at a different level and with reports insisting we were after him last season it would be no surprise to see a bif go in.

There were many media claims  in his home country of Switzerland which suggested that the Hammers tried and failed in a bid to get him to the London Stadium this summer.

Shaqiri joined Liverpool last summer from Stoke City for a bargain £13 million but after an exciting start his form fell away for the Reds.

The 27-year-old has only scored 6 times and 5 assists in 30 appearances and with Jurgen Klopp reportedly looking for a player to apply more pressure to his strike force Shaqiri could be sacrificed  with Samuel Chukwueze from Villarreal being a Liverpool target.