Posted by Dave Langton on March 9, 2022 in News, Whispers

West Ham are set to battle Arsenal for the signings of Darwin Nunez and Armando Broja in the summer transfer window, according to the London Evening Standard.

The Hammers are keen to strengthen their attack in the next transfer window, having failed to add a new centre-forward in the January window. 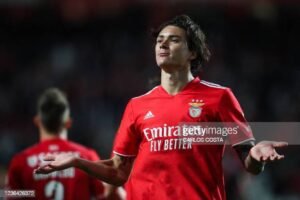 Nunez was considered as an option and a bid was launched to sign the Benfica striker but the deal was too difficult for the Irons to pull off.

The 22-year-old has been in remarkable form this season and has scored 20 goals in just 21 league games for Benfica, and the Standard reports that both the Hammers and the Gunners are interested in doing a deal at the end of the season.

Broja is also seen as a potential recruit, having impressed on loan at Southampton from Chelsea but it remains to be seen if the Blues would be willing to sell to either of their London rivals.

One comment on “Report: Hammers to battle Arsenal for strike duo”