West Ham are monitoring Nick Pope ahead of a potential summer swoop, according to The Daily Mail.

The Hammers are said to be keeping a close eye on the England international as they weigh up a potential permanent replacement for Alphonse Areola. 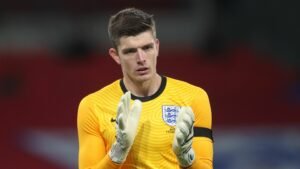 The Frenchman has been on loan from PSG and has played primarily in the cup competitions, mainly in the Europa League.

But the Hammers are now considering a potential swoop for Pope, particularly if Burnley are relegated.

They would hope to do a deal for the England international for a fee lower than the deal arranged for Areola were they to drop through the trapdoor.

Pope has a deal that runs until 2023, with the option of an extra 12 months, and was particularly excellent for the Clarets at the weekend against the Hammers in the 1-1 draw. Pope has also won eight caps for England and is likely to be in the squad for the 2022 World Cup at the end of the year.