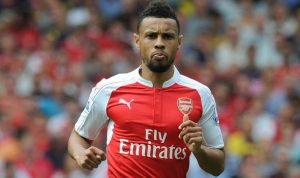 The Irons are reported ready to move in durng the windown but La Liga outfit Valencia are now reported to have entered the frame.

Arsene Wenger claimed this morning that a move could be on although added there had been no contact with West Ham at this stag.

He said: “We have no contact with West Ham.”

Hammers boss David Moyes is on the hunt for additions in midfield and the 26 year old is believed to want a Premier League stay although the Spanish option will be attractive to a player who has made just seven appearances from the bench this season.

Valencia were keen to add Coquelinto their squad last summer but the the player decided to stay and take his chance with the Gunners.

However, he remains very much down Arsene Wenger’s pecking order and the north Londoners are ready to sell at around £10 million for a player who is very much a ball winner.

The Frenchman joined the Gunners as a 17-year-old from Stade Lavallois in 2008.