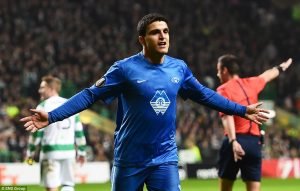 Reports have emerged this morning that Basel winger Mohamed Elyounoussi is being eyed by the Hammers after his exploits against Manchester City in midweek.

The Mirror claims that ourselves and Southampton are tracking the Basel winger who would cost in the region of £15 million.

However, it would be surprising were the Hammers not previously aware of the player and it does seem a little convenient that his name arises immediately after one good performance!

He provided a man-of-the match display in Basel’s Champions League win at City in midweek, scoring the Swiss champions’ equaliser before setting up their second leg winner at the Etihad.

The 23 year old has found the net seven timess and racked up 13 assists this season.

He joined Basel two years ago and still has three years left to run on his current deal.