West Ham have been linked with a swoop to sign Keylor Navas from PSG.

The goalkeeper is the understudy to Gianluigi Donnarumma at the French club. 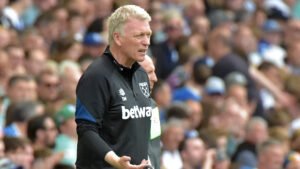 Navas is yet to make a first-team appearance this season and La Republicca, via The Sun, now reports that he is being eyed by both Napoli and the Hammers.

West Ham and PSG have done business before, with the Irons buying Alphonse Areola from PSG earlier this summer.

And it now seems that they could try to sign another goalkeeper from the French club as David Moyes continues to bolster his squad.

Lukasz Fabianski is 37 and is likely to retire at the end of the season but Navas is only two years younger.

Still, the Irons are said to be in a position to offer him a higher salary than the Italian club, meaning they are currently leading the race for his signature.

We’d have to say that there are bigger priorities for Moyes this summer than signing another goalkeeper so take this with a pinch of salt.