West Ham want to do a deal to sign Sassuolo striker Gianluca Scamacca, according to a report from Gianluca Di Marzio.

The striker was in exceptional form last season, scoring 16 goals in 36 outings in Serie A. 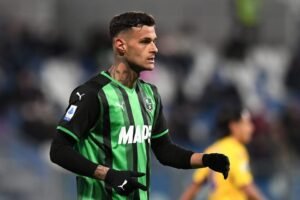 He has also attracted interest from French giants PSG, who are aiming to reinforce their strikeforce this summer.

They have yet to meet Sassuolo’s asking price, however, as they are asking for a fee in the region of €50m, or £42.2m.

As a result, the Irons are said to be involved in the race to secure his signature and a bid has already been tabled, worth €40m, or £33.7m.

That does not meet Sassuolo’s asking price, either, and, as a result, there remains a race to secure his signature.

PSG are also lurking, though, and it may be that it comes down to which club is willing to go the highest; Sassuolo are under little pressure to sell, as his contract runs until 2026.