Manchester United are being linked with a shock swoop for Marko Arnautovic.

The ex-Hammers star left the club back in 2019 to join Chinese club Shanghai Port. 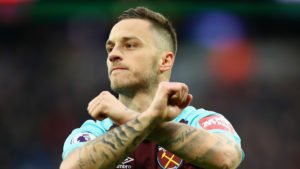 He spent two years there before moving to Italian side Bologna, where he remains.

Arnautovic has scored 15 goals in 34 games for the Serie A club and new United boss Erik Ten Hag is reported to have sanctioned a bid for the Austria international.

Gianluca Di Marzio, the Italian journalist, reports that an offer worth in the region of £7.5m has been rejected.

Arnautovic forced his way out of the Hammers to join the Chinese club, Shanghai, but made 65 appearances for the Irons, scoring 22 goals and laying on 12 assists.

He is 33 and has won 102 caps for Austria, but this would be a remarkable signing for United to make, given that he just isn’t an elite centre-forward any more.

One has to wonder what United’s strategy is here.