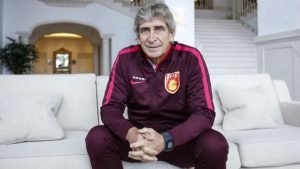 Spanish newspaper Marca claims Manuel Pellegrini is in advanced talks with West Ham intermediaries over the possibility of taking the West Ham job.

The newspaper report boldly claims the Hammers are believed to have an advanced agreement with him, although the paper says Pellegrini would be willing to break it by taking the job at Sevilla. The report says West Ham wanted to hire him back in the winter and have now followed up that initial interest.

No decision will be taken on the West Ham manager’s role until after the season ends tomorrow but if the reports are to be believed Pellegrini is on a shortlist. News of the manager situation is expected 10 days after tomorrow.

Pellegrini reportedly earns €12 million per year in China so it might take an offer of around £10m per year to land the former Manchester City manager.