Posted by Dave Langton on August 2, 2022 in News, Whispers

West Ham are set to table a new bid for Lille midfielder Amadou Onana this week, according to reports in France.

Foot Mercato reports that the Hammers remain hot on the trail of the 20-year-old. 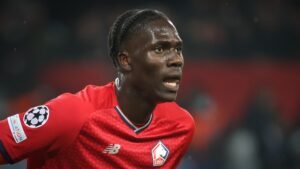 We reported earlier this week that there is real interest in Onana and the Irons are continuing to work on a deal in an attempt to bring him to the London Stadium.

West Ham have seen bids rejected for Onana already, and the French report now claims the Irons are considering tabling a fresh bid before the end of the week.

It remains to be seen how high they will go but it is likely to be an offer around €40m, which equates to £33.4m, and would be a major investment for the Belgium international.

He plays primarily as a defensive midfielder but is also capable of moving forward into a central midfield role, and has made a total of 41 appearances for Lille.

3 comments on “Report: New bid to be tabled soon”