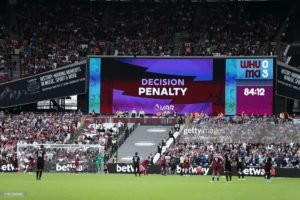 Incorrect penalty decisions were made by VAR in all three of yesterday’s (Thurs)  games, the Premier League told BBC Match of the Day.

Bruno Fernandes won a spot-kick which he scored in Manchester United’s 3-0 win over Aston Villa.

James Ward-Prowse hit the bar after a disputed penalty as Southampton drew 1-1 with Everton.

And Tottenham should have had a penalty for a Joshua King shove on Harry Kane in a 0-0 draw with Bournemouth.

The Premier League confirmed United and Southampton should not have been given penalties, but Tottenham should have been awarded one.

Former Everton midfielder Tim Cahill, a Match of the Day pundit, said a former player should be involved to work alongside the VAR officials at Stockley Park.

“I think that would really help them, to understand the movements,” the former Australia international said.

“When a player falls to buy a penalty you can feel it. It must need a player there to give advice on what the player is doing.

“They’re there to make the big decisions and they can’t do it. It’s really disappointing.”

Fifa is taking over direct responsibility of VAR from football rulemakers IFAB and is expected to insist on greater consistency across more than 100 global leagues, on issues such as the use of pitchside monitors.

There has been confusion in the Premier League, with referees’ chief Mike Riley having limited the use of monitors because it slowed the game down.

ClaretandHugh says: Let’s be frank about this. VAR – a concept discussed for years as the answer to disputes – has in reality – been a disaster during its first season. The Hammers is high on the list – if not top of the clubs – that have suffered at hands of the video assistant referee. That’s more than a tad frustrating but the fact that seemingly game after game high profile mistakes are being made demonstrates just one thing – with humans having the decision over the incidents they will continue because every single on of us is error-prone. It seems from where most of us are sitting that technology can never be the full answer and unless all mistakes are cut out then it’s of little use for just one mistake can take a team down or ensure another is not promoted. And it never is going to be just one – that’s obvious. Even if there were to be a 75 per cent improvement that’s not enough and in such circumstances – where decisions take so frustratingly long to make whilst impatient fans see the game halted sometimes for minutes – there is just one answer as we see it,  go back to where we were before this scneario finally unfolded because it’s a joke and a very very unfunny one at the moment.