Report: Players revolt on the cards 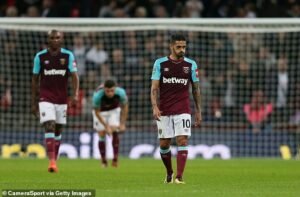 Lanzini doesn’t want to return until a vaccine is available

Fears are growing that up to 50 players could rock the Premier League’s Project Restart plan by snubbing a return due to safety concerns.

The Mirror report that one club executive feels there could ‘two or three’ players from every club that decides against returning to complete the 2019-20 season.

Already Sergio Aguero, Manu Lanzini and Glenn Murray have expressed serious concerns and they are not alone according to the report.

Club owners will be caught between the devil and deep blue sea should they try to insist that players MUST turn out under the terms of their contract given the serious health considerations at stake.

Should they, for example, attempt to withhold pay they are bound to run into legal challenges from the players and their representatives who may hold a strong case should it go to law. And that would before the Professional Footballers Association were to get involved.

Reports of a potential revolt from players is apparently on the cards but even that seems unlikely to see the Premier League try to desperately push ahead with its plans with a vote expected by chairmen on Monday.

The player briefing is also set to address the return to training and both the Premier League and club medics are convinced the new protocol will make it safe for players to return.