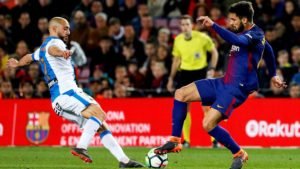 Spurs are reported as having joined the Hammers in a chase for Barcelona midfielder Andre Gomes.

We  were reported as holding an interest in the Portugal international last summer but according to the Mirror, Spurs have renewed their interest in the Euro 2016 winner.

He has endured a miserable two years at the Nou Camp and is keen on a Premier League move after making just   15 La Liga appearances this season.

He has often found himself the target of terrace boo boys after what they perceived to be poor performances after a £29 million transfer to the Catalan giants.

The 24 year old has been capped at all international levels for his country and started his career at Benfica before moving to Valencia and on then expensive move to Barca in 2016.