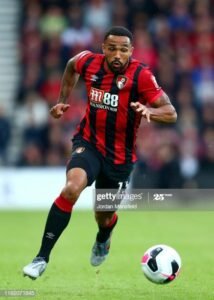 Tottenham have reportedly are leading West Ham in the chase for relegated Bournemouth’s  Callum Wilson.

Although the Hammers have been linked with the player,  we understand a more likely target for David Moyes is Ollie Watkins at Brentford.

The Daily Star claims Spurs could turn their attention  to Wilson and that Jose Mourinoh believes he is in the driving seat to get the 28-year-old,.

It is understood that the north London club are keen on the England international alongside Steve Bruce’s Newcastle United and West Ham, with the trio already recently linked with interest.

Wilson has allegedly told the Cherries he wishes to leave the club and another linked with the Hammers is David Brooks but he is named as a £30 million player in some areas despite his limited appearances through injuries.

Wilson however, has a poor track record on injuries and has never been mentioned in any conversations with have had with our sources although Watkins is an attractive proposition and fits the Moyes age profile should the manager raise sufficient cash to move for him.

Currently, the plan is to continue with Seb Haller and Mikey Antonio as our front men given it would be impossible to get anything like the money we spent on the Frenchman back in a deflated summer market.

As is well known Moyes is concentrating on his defensive set up before looking up front but Watkins is certainly among those on his list should there be enough  funds..